Stunts is a racing game developed by Distinctive Software and published by Broderbund Software in 1990. Outside the US, it was also released as 4D Sports Driving by Mindscape. The aim is to complete a lap of the track as quickly as possible without crashing. However, the track will often include special elements such as jumps, loops, slaloms and corkscrews. You can race against the clock or choose between six opponents. What set Stunts apart from other racing games at the time was the inclusion of a built-in track editor, which allowed players to create their own tracks and share them with others. 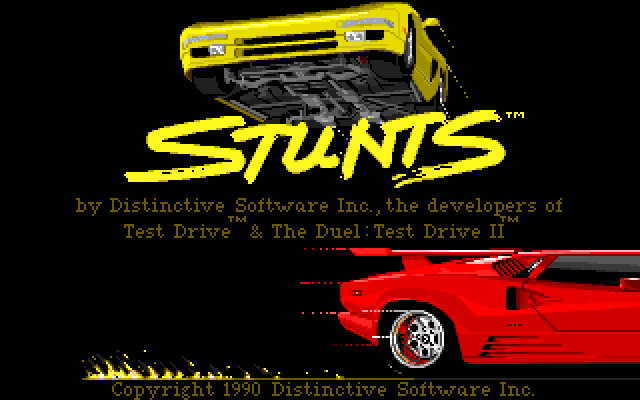 What is Race For Kicks?

Race For Kicks is an online tournament for Stunts. How is this possible for a game that was released in 1990? Well, another stand-out feature of Stunts is its replay system, which allows replays to be saved and shared with others. Because the game only stores the track and user inputs in the replay, the file size remains small, making online tournaments like Race For Kicks possible.

To hold any sort of tournament, you need rules and Race For Kicks is no exception. These are listed in the Rules section. Most of the time, races are held with strict OWOOT rules, however there are exceptions. In basic terms, OWOOT means that you must remain on or over the track at all times. You may not use shortcuts or skip stunts in any way. If you are new to Race For Kicks, please read through the rules so that you understand them entirely.

Participating in Race For Kicks

Stunts was originally written for MS-DOS, so most people these days run it in an emulated environment such as DOSBox. While this is relatively easy to set up, it is still a complicated process for the casual gamer. For this reason, we have provided a Stunts installer for Windows users that can be downloaded from the main page. For users of other operating systems, we also provide a standard Stunts archive which can be used in both native and emulated DOS environments. Both of these packages include everything that you need to participate in Race For Kicks, even custom cars. If you would like to use your own Stunts installation, you will need version 1.1 of the game released by Broderbund Software. Custom cars can be downloaded from the race page, if necessary.

Once you have the game installed, you need to sign up for Race For Kicks. This is a straightforward process and simply involves selecting a user name and password.

Tracks can be downloaded from the race page. Simply save them in your Stunts folder. Due to limitations of the game, file names must be 8 characters or less, otherwise they will be automatically shortened when you load the track. 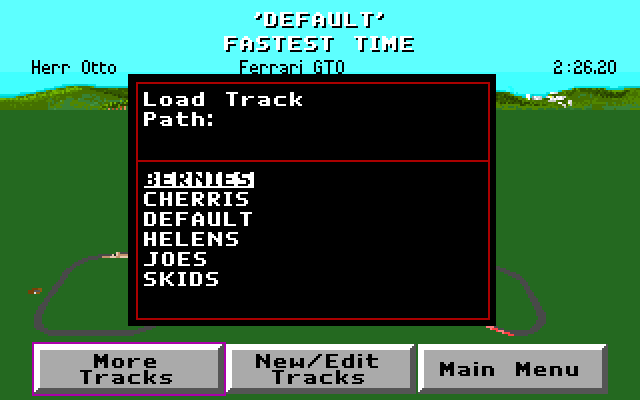 So, you’ve completed a race and now you’re ready to post a replay. Replays must be less than 10 minutes long and you can post as many replays as you like for a single race. To do so, simply follow these steps:

Your replay will appear on the scoreboard immediately, however, it will show as "Pending verification" until it is verified by a moderator. Replays are verified periodically and this process will happen without any further action on your part. If your replay is rejected, you will receive a message via the Race For Kicks messaging system explaining why.

Stunts allows you to continue driving from any point during a replay, regardless if it is saved or not. This is similar to the "Rewind" feature in many modern games. Using replay handling allows you to record a perfect lap without having to start from the beginning every time you crash or drive off the track. To do this, simply rewind or fast forward the replay to the point where you would like to continue driving from and select "Continue Driving" from the replay menu. You can save your replay at any time. Once saved, you can load it again to continue from it, even at a later date. 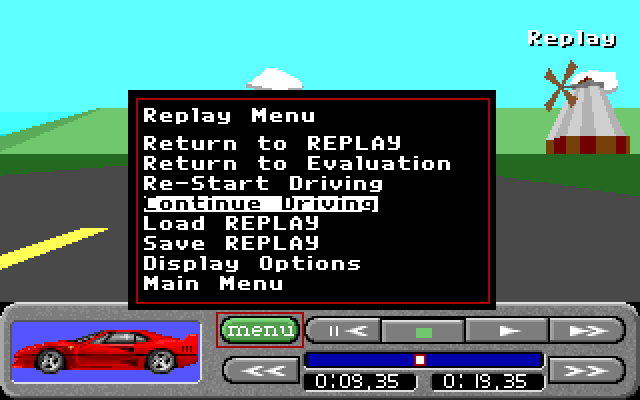 The cars that are supported in Race For Kicks are listed below. Since specific cars are chosen for each race, this information mainly applies to the Permanent Competition: